About Doors Reopening in Washington and Brussels - interview with Nicolae Popescu, Minister of Foreign Affairs and European Integration of Republic of Moldova

During the period of September 18 to 19, 2019, a delegation of the Government of the Republic of Moldova, led by the Prime Minister Maia Sandu, paid a visit to the United States. Minister Nicu Popescu was a delegation member. On September 18, 2019, the delegation met with the Diaspora representatives in Washington, DC at the Rayburn House Office Building. At the end of that meeting, Minister Nicu Popescu granted an exclusive interview to Tiberiu Dianu. Tiberiu Dianu has published several books and a host of articles in law, politics, and post-communist societies. He currently lives and works in Washington, DC and can be followed on MEDIUM. https://medium.com/@tdianu

1. Minister NicuPopescu, you are the Minister of Foreign Affairs and European Integration ofRepublic of Moldova. What are the goals of your visit to the United States?

We have a strategic partnership with the United States. We have an excellent relationship, we have an enormous support from the United States, both politically and economically, financially, educationally, and we want to develop this relationship. Previously, Moldova and the United States went through some stages, some more difficult relations. Last year the USAID, the American Agency for Assistance, suspended or froze several assistance projects for Moldova. The European Union suspended the assistance provided to Moldova last year. We are now in a position to reopen the doors in Washington,Brussels and this visit is part of these diplomatic efforts to reconnect Republic of Moldova to the Western space.

2. Very encouraging.Thank you. What are the challenges that Republic of Moldova is now facing inyour field of activity?

So, my field of activity is not isolated from other fields.The main challenge facing the Republic of Moldova is corruption, a high degree of corruption that creates economic, demographic, and geopolitical risks.Because we know well that some corrupt institutions are also open to adverse geopolitical influences. And, in this regard, corruption is the main scourge of Republic of Moldova. And diplomatically, obviously, we are in a region where there are several geo-political cleavages that we must manage.

3. Last question, Mr.Minister, Sir. How do you see, in your opinion, the role of Romania in fulfilling the goals of the Republic of Moldova?

We have an excellent relationship with Romania; it is the largest trading partner. 27 percent of Moldova’s exports go to Romania. Romania supports us also bilaterally. We have several infrastructure interconnection projects. Our goal, the aim of the Chisinau government is to move, not just to the language, culture and history community with Romania, but to develop an infrastructure community. Romania is building a new gas pipeline in the Republic of Moldova. We want the construction of several bridges. We want to connect the Republic of Moldova to the Union Highway, which is being built. So,we have a lot of projects that target concrete benefits for the citizens on both sides of the Prut River and, ultimately, aim at reconnecting the Republic of Moldova to the European space through Romania and with Romania.

TIBERIU DIANU has published several books and a host of articles in law, politics, and post-communist societies. He currently lives and works in Washington, DC and can be followed on MEDIUM. https://medium.com/@tdianu 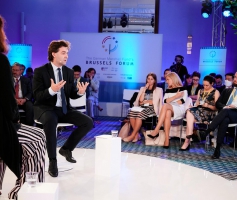