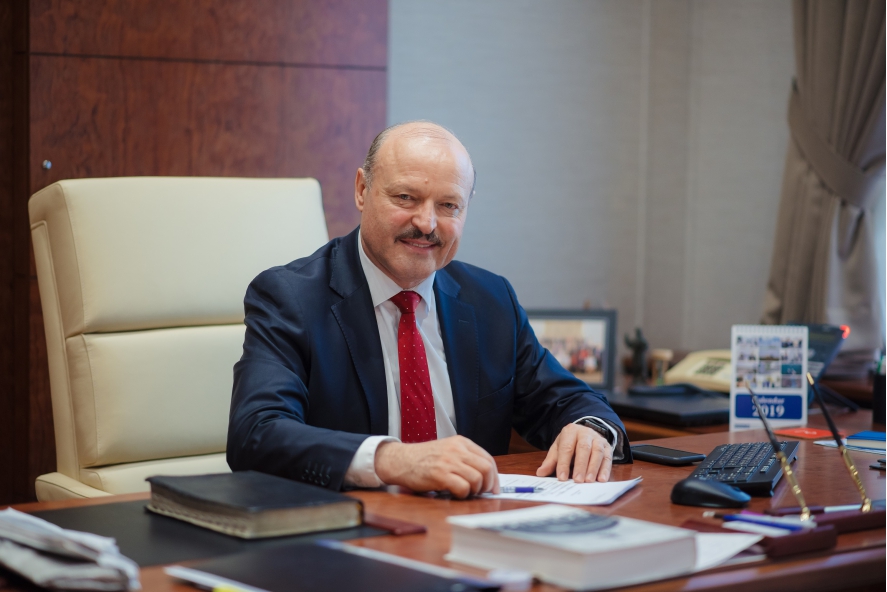 Interview with Valeriu Ghileţchi, the vice-president of the Parliament, the candidate in the USA and Canada constituency, in the parliamentary elections of 24 February 2019.

T: You are one of the most experienced deputies in the history of the Republic of Moldova. How do you characterize the role of the Parliament in the development of the country?

V.Gh .: From the discussions that I have had with people over the years, I understood that citizens want the problems of society to be solved by deputies. I think that Parliament is the most important institution in the state, which is primarily responsible for the strategic direction of the development of the country. We, deputies, are chosen by people and we have the task to defend the interests of citizens. This includes the duty to promote laws that ensure people’s well-being, to provide the necessary services for citizens.

Globally, we see a strong struggle against the moral values that favoured the formation of Western states. Decisions that attack these values are often taken outside the legislative institutions, which express the choice of citizens. Thus, there is a danger that decisions that have a strong impact on the future of our families and society do not reflect the choice of the majority of citizens.

I believe that Parliament must play a decisive role in the setting of politics in line with citizen’s wishes.

T: What should be done to make the Legislature more efficient?

V.Gh .: First of all, I think it is important to make the activity of the Parliament transparent so that it will be clear what laws have advocated each deputy, what initiatives has he registered and what interests he promotes. We, as elected people, are at the work of the citizens. Citizens who voted us must know what law approves each deputy and what he does. By improving the work of parliamentarians, their responsibility will increase. I supported and I very much hope that the e-Parliament program will be implemented in the next parliamentary term.

At the same time, it is important to improve communication with citizens. Personally, I have always tried to respond to every request from the citizens. If you ask my wife, she will tell you without hesitation how much time I spend even at home answering people’s questions on the phone or facebook. I believe that if we will do this in the institution of the Parliament, the trust of citizens will increase and we will be more efficient.

T.: What principes are important for the activity of the Parliament which will be elected on 24 February?

V.Gh .: The principles that I consider important for the activity of any legislative, not just the for one which will be elected on February 24 are responsibility and transparency for voters, pursuing of the supreme interest of the citizens, maturity in the formation of the coalition of government.

For example, according to surveys, no party alone will be able to form a government after the elections in February. This will imply the need to create a coalition. Political forces must pursue the development of the country in order to continue the European path of the country.

Q: What priorities will you have in the future Parliament?

V.Gh .: For the next parliament, I have set three priorities: to improve the connection of Moldovans from the USA and Canada to their native country, to continue the struggle for moral values, to promote politics that would improve the well-being of Moldovans.

The issue of obtaining identity papers for citizens living abroad is still one of the biggest difficulties of the citizens of our country in America. The procedure for obtaining documents is very expensive and difficult. Last year, the budget provided an amount of about 1 million lei for the passports of the Moldovans living abroad.

Another issue that I will focus on is pension insurance for citizens who contributed to the social fund in Moldova and emigrated to the US and Canada. We have adopted a law in this respect, and in the future Legislative we will ensure its implementation.

T: What determined you to run for a new term and why did you choose the US and Canada constituency?

V.Gh .: I have a very special relationship with the American continent: parents of my wife live in the US, I have many friends who emigrated to the US and Canada, I have attended a number of courses for my doctorate throughout the American continent for many years. I led the Friendship Group between the Parliament of the Republic of Moldova and the US Congress, I was the first deputy who signed a Memorandum of Cooperation with the Canadian Parliament. Just over the past 10 years, I had over 20 visits to the USA. At the same time, both of my sons graduated from the university in the USA, after which they returned to Moldova.

The US was always a model for me in many respects: a state that has been based on Christian moral principles and is an example of democracy for everyone. The USA and Canada, more than other countries, transform the interest of individual into a priority around which are formed the politics of the state.

T: What are your thoughts regarding these parliamentary elections?

V.Gh .: I am convinced that together with the support of our citizens from the USA and Canada, we can build a better country. This is the message I want to transmit to our citizens. Even if the distances separate us, homesickness makes us stronger. Moldovans from home need the support of those from abroad to succeed. This support can be manifested both through charity projects and investment models. We must bring home the entrepreneurial spirit so well developed by our citizens in America to increase the country’s economic growth.

I will continue to fight for the promotion of moral values, which have largely defined my work so far. I support the traditional family, as it is defined both in the Bible and in the Constitution of the Republic of Moldova. I advocate the defence of fundamental freedoms, especially of religious freedom and conscience. For these reasons, when the law on equality was adopted, I voted against, even if all the other colleagues voted for.

T: How do you characterize the electorate in the constituency from the USA and Canada?

V.Gh .: The electorate in this constituency as well as at home is very diverse in terms of linguistic, educational or political views. Most of those who left the country have done it to provide a better future for their children. I am proud of their sacrifice: it is very difficult to move to another country with another culture and language.

I think we should not compare the citizens of the country and those from abroad, because, no matter where we live, we all are a family, and what the desire to have a better life unites us.

T: What are the most important issues in the constituencies from the USA and Canada and what solutions do you have for them?

V.Gh .: I have already mentioned the issue of the perfecting of identity documents for Moldovans in America. At the end of 2018, was started a process of issuing passports for our citizens from the American continent. We will continue to allocate resources to ensure that everyone who needs documents can get them quickly. We will also analyze the option for people to receive documents from a distance without going to the consular offices.

Moldavians developed very profitable businesses. Now many people ask me how they can invest financial resources in business in Moldova. I will work in the new Legislative to create an investment fund to attract resources from the diaspora of USA and Canada and turn them into projects with profitable economic potential.

T: What message do you have for voters in the USA and Canada constituency?

V.Gh .: I’m convinced that only together we can build a better country. I will continue to work in the interest of the citizens and for the benefit of our nation, to represent them with dignity and responsibility both at the national and international level. Therefore, I ask them to vote on February 24 and vote for me.