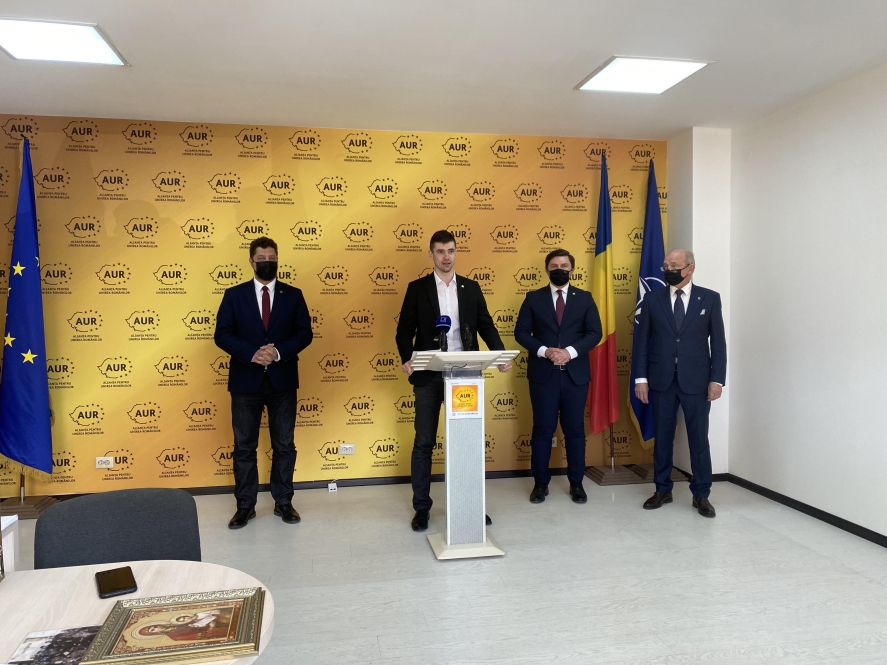 The Alliance for Romania’s Union (AUR), the political group led in Romania by George Simion and Claudiu Târziu, was also launched in the Republic of Moldova. The event took place on Saturday, March 27, on the 103rd anniversary of the Basarabia Union with Romania. The president of the party is the civic activist and the leader of the “UNIREA-ODIP” Association, Vlad Bilețchi, informs Tribuna with reference to a press release.

The parliamentary office of the deputies George Simion and Boris Volosatii was inaugurated today. The event began with a tedeum and the sanctification of the parliamentary office, to which all citizens on both sides of the Prut can come to strengthen the unionist movement and find solutions to the problems they face.

Later, at a press conference, the doctrine and objectives of the AUR – Republic of Moldova party were presented, which will have a conservative and right-wing ideology.
In his speech, Vlad Bilețchi ,president of the Alliance for the Union of Romanians from the Republic of Moldova,stated that AUR will not yet represent a unionist party on the political scene that has come in order to divide the pro-Romanian movement. The Alliance for the Union of Romanians aims to be the voice of all those who feel Romanian and want to reset the political class through a young, new force that promotes the most beautiful values, such as family, faith, nation and freedom, says Bilețchi.

“In order to avoid any speculation – we are NOT YET a unionist party on the political scene in the Republic of Moldova. The Romanian Popular Party has became and has thus became the Alliance for the Union of Romanians. Over the last 30 years, the political class in the Republic of Moldova has shown that its own interests and wealth in its pockets are more important than the interests of its citizens. The time has come for a reset, for a new, young political force, to crown the aspirations of all those who feel Romanian. The Alliance for Romania’s Union is not a duzin party, it is not a new single-use party, it is not an annex of anyone and not a simple collector of votes. It is a force in the process of becoming, which will be the basis of a new great National Renaissance Movement”, said Vlad Bilețchi.

The event was attended by the co-president of the Alliance for the Romanian Union, by Romanian senator, Claudiu Târziu, who also sent a message from the leader George Simion, who was unable to come to the Republic of Moldova.

“The Alliance for the Romanian Union writes history on both banks of the Prut River. More than 40 AUR deputies came today to the Republic of Moldova to celebrate this historic moment and to send the message that Romanians in Bessarabia are expected at home in Greater Romania. Faith, Family, Nation and Freedom are the values and principles we promote in Romania, and from now on, they will stand in the forefront on this bank of the Prut as well. We did not come to divide, but to call for national unity “, said Senator Claudiu Târziu.

The deputy of the Romanian Parliament, Boris Volosatîi, the former director of the “Gheorghe Asachi” High School in Chisinau and the former Romanian deputy, Constantin Codreanu, were elected as the first vice-presidents of the party.