The man of the week: Charles Michel, President of the European Council 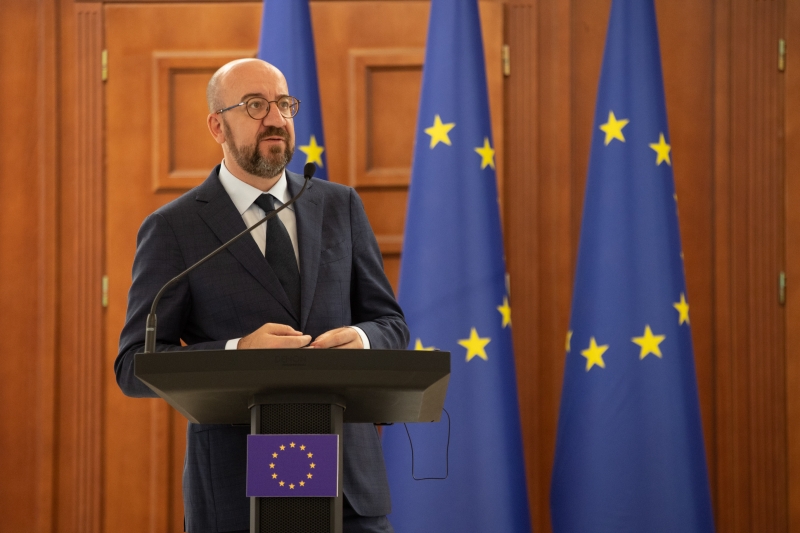 The man of this week is Charles Michel, President of the European Council, who paid an official visit to the Republic of Moldova on 4th of May – TRIBUNA reports.

Remarks by President Charles Michel at the press conference with President Maia Sandu in Chisinau:

„Thank you for your warm welcome. I am very glad to be in Chisinau again.

This is a defining moment for Moldova and for Europe. Russia’s war against Ukraine has caused senseless suffering and pain. And the consequences do not stop at the Ukrainian borders. The consequences are global – from Russia’s attack on international law, to one of the biggest refugee crises since World War Two, to rising food and energy prices.

Moldova has been particularly impacted by this war in your neighbourhood. And it is exacerbating the existing crises of COVID-19 and risks to your energy supply. Most recently, Moldova has been affected by provocative security incidents and cyberattacks.

But from day one of the Russian invasion in Ukraine, you have been clear on two issues: condemning the Russian aggression and welcoming the huge number of Ukrainian refugees.

The EU stands in full solidarity with you, with Moldova. It is our European duty to help and to support your country. And to increase our support for your stability, security, territorial integrity and sovereignty. Our economic and political support must continue hand in hand.

This visit is an opportunity to witness your tireless efforts in hosting roughly 100 000 refugees. This is the highest number per capita of all the countries hosting Ukrainian refugees.

And the EU has stepped up to help, providing €13 million of immediate funding for humanitarian programmes, followed by a further €15 million for migration management. We have also provided €15 million to reinforce the EU border assistance mission.

The EU has offered comprehensive support to strengthen Moldova’s resilience. And our support will continue to match the scope of the challenges.

First, with humanitarian aid. We have mobilised financial support.

Second, on energy. Since March, the Moldovan electricity grid has been synchronised with the continental European grid to support the stability of its power systems. And at our last European Council meeting in Brussels, we agreed that our upcoming common platform for the purchase of energy resources will be open to the associated partners, including Moldova.

Third, on security and defence. We will help Moldova to strengthen its resilience, and to cope with the consequences of the spill-over from the Russian aggression in Ukraine.

Last year, we announced support of €7 million for equipment for the medical and engineering needs of the army under the European Peace Facility. And this year, we plan to significantly increase our support for Moldova by providing its armed forces with additional military equipment.

Finally, we believe that reforms will enhance Moldova’s resilience and shore up your sovereignty and independence.

We will continue to support Moldova on its path of reforms in the area of rule of law, and in particular the ongoing reform of judicial governance bodies and fighting corruption. These efforts are particularly important in the context of Moldova’s recent application to become a member of the EU.

We will continue to deepen our partnership with you to bring your country closer to the EU.

Today, the people of Moldova, and their institutions, are facing severe consequences from Russia’s war against Ukraine. In these difficult times, we must help our partners and friends to defend their security and their democratic values – our common democratic values.

Now, more than ever, it is time to join forces and show our unwavering solidarity with you and with the Moldovan people. Thank you.”

TRIBUNA notes: Charles Michel was born in the Belgian town of Namur in 1975, when the European Union consisted of only nine member states. He grew up listening to the stories of his parents and grandparents, who had experienced the devastation of the Second World War and knew how precious peace and reconciliation are. Today he says: “I have never taken these for granted”.

Charles Michel studied law at the University of Brussels. In 1998, he had the opportunity to take part in the Erasmus programme. He went to the Netherlands, and fell in love with Amsterdam. “I went there as a Belgian, and left as a committed European,” he says. There, he made friends from all over the continent and understood that Europe is all about its values: living together peacefully, listening to others, and showing them respect – no matter the person’s colour, race or background.  After his studies, he became a lawyer in Brussels. For Charles Michel, law has always been about people and protecting their rights and freedoms.

Passionate about politics from a young age, Charles Michel decided to run in the elections soon after university. He was elected as a member of the federal parliament in 1999. A year later, he became the Walloon Minister for Interior Affairs and Civil Service, and in 2007, Federal Minister for Development Cooperation. He played an important role in his political party, MR (Reformist Movement), as spokesperson (2004-2011) and finally leader of the party (2011-2014).

During this time, between 2006 and 2014, he was also Mayor of Wavre – a small town close to Brussels, where he lives with his partner Amélie and their children.

“For me, politics has always been about people. Being a mayor taught me to keep my feet on the ground. And my priorities straight”, he says.

He is the father of two daughters and a son. “I am a very lucky man,” he admits, “I learn a lot from them. And no matter how busy I am, I always make time for them.”

Following the federal elections in June 2014, Charles Michel was involved in coalition negotiations. He became the Prime Minister of the Kingdom of Belgium in October 2014. His most challenging moment as Prime Minister came a year and a half year later, when on 22 March 2016, two deadly terror attacks struck Brussels Airport and the Maelbeek metro station. “On that day, I realised what it means to serve your country. Your only concern is to protect your people,” he says.

On 2 July 2019, EU leaders elected Charles Michel as President of the European Council. He took office on 1 December 2019. 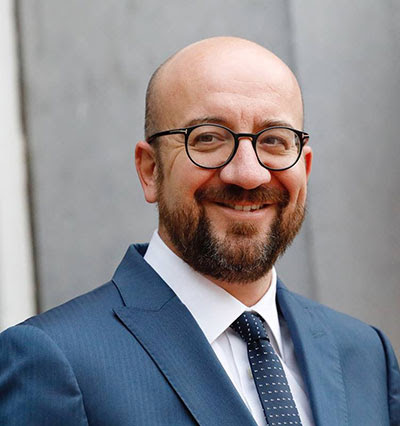 To be appointed as President of the European Council is a great responsibility and a task I will fulfil with commitment. A united Europe with respect for national diversity is my objective. Solidarity, freedom and mutual respect are the core of the European Union. I will uphold these values.