The interview in which Vitalie Pirlog exclusively speaks about INTERPOL activity 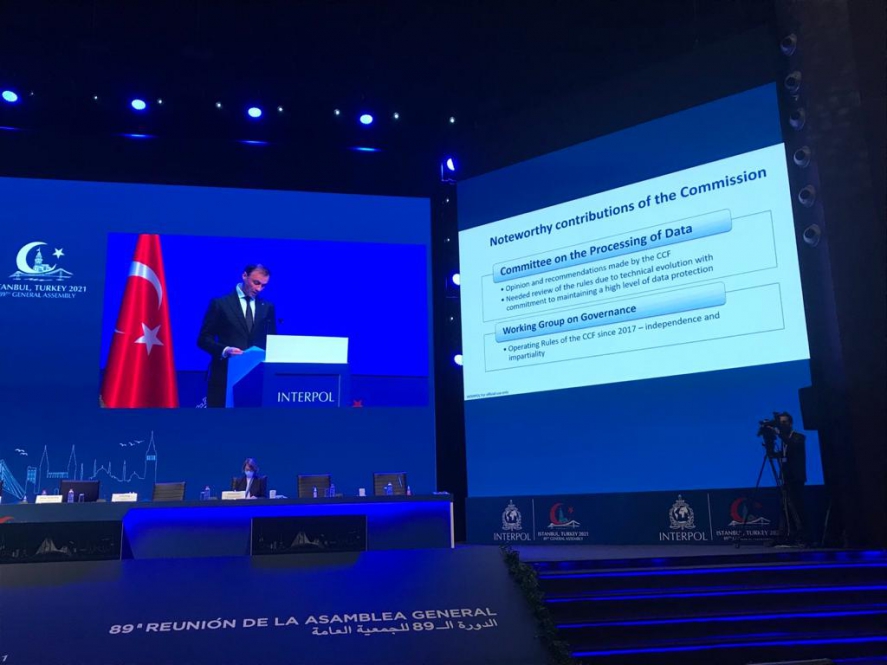 Vitalie Pîrlog, chairman of the Commission for the Control of INTERPOL’s Files, gave an interview to TRIBUNA in which he spoke about his work.

T: Mr. Pîrlog, recently, at the end of November last year, you gave a speech at the Interpol General Assembly, which, as far as it is known, covered several important issues. Could you elaborate/open the parentheses on this?

V.P.: Firstly, in that speech I referred to strengthening the communication between the national entities and the Commission which I lead. In this regard, a guide has been prepared for national entities, which describes in detail the specific procedures, and the aim has been to improve cooperation with the countries involved. I mentioned in the speech that the Commission has become much more open in its communication with the States and their delegations that wish to contact the Commission in order to maintain effective dialogue and cooperation.

Secondly, in the report I relied on some statistics regarding the activity of the Commission. Thus, during 2019-2020, the Commission received 2740 complaints. During the same period, the Commission was able to complete its examination of 3165 complaints, of which almost 2500 led to conclusions on data compliance. By way of comparison, since 2017, when I took over as President of the Commission, there has been an increase in the number of applications received. Now we talk about thousands of applications whereas in 2016 there were only 847. The main issues addressed by the applicants remain the same as in previous years: human rights and political issues.

By the way, it is important to note that the Commission does its best to ensure compliance with Interpol rules. It always tries to find the right balance for good international police cooperation and human rights, but at the same time seeks to protect the organization’s immunity.

T: It is not clear to many what the mandate of the Commission you lead is.

V.P.: The Commission’s mandate is to ensure that the data recorded in the international Interpol system complies with Interpol rules.

T: So, can the Commission determine whether the data should be recorded in the Interpol information system?

T: Can a decision of the Commission replace a national decision on a particular case?

V.P.: The Commission regularly mentions, even in its decisions, that its role is not to substitute, replace or act on behalf of a sovereign national jurisdiction. The Commission is not empowered to act in national legal cases and proceedings, as only the competent national authorities can do so.

The Commission has a limited role in assessing the validity of national procedures and elements of evidence in a particular case. Generally speaking, the Commission does not conclude an investigation regarding the national procedural law or take any such decision. Decisions that do not comply with the Interpol rules do not, in any way, imply that the procedures undertaken at national level are not lawful or do not comply with national law.

T: In fact, your presentation of the above-mentioned report surprised some people from Moldova. It is considered that you have completed your term.

V.P.: I also heard some statements in this regard. I think they were made by people who don’t know the reality. I will continue to work in this position of great responsibility and I will continue to perform my duties honestly for as long as I remain in office. I regret that some undesirable emphasis has been placed in the mentioned statements, because it is not about me as a person, but about Interpol, which is one of the most important international organizations. In fact, it is not the first time that statements have been made that prove only a lack of basic knowledge.

T: What do you mean by this?

V.P.: Well, remember the statements of some politicians that I should be removed from Interpol and that Moldova should appoint another representative there. I had to go public and say that I do not represent Moldova, and that I am not a state delegate there, but I was elected by the General Assembly at that time and, moreover, that I do not participate in the examination of cases from the Republic of Moldova. Therefore, it would be very good if all those who make statements on the subject would have a thorough analysis of the situation before making them, because, I repeat, it is not just about me, but also about the image of an important international organization and also the image of the Republic of Moldova.

T: Well, even recently a person with an important position in Moldova stated that since you stopped working for Interpol, things in this field have improved significantly…

V.P.: First of all, there are specific and extremely complex procedures within Interpol. There is no way for a single person to decide something or to set the tone for certain events, situations. Secondly, if I am still in office, it is clear from the logic of this dignitary that I am personally responsible for the improvement he is talking about. It was not in vain that I said earlier that it would be good if those who wished to make statements on the subject, firstly looked into things thoroughly.

In general, I would encourage the authorities, when in doubt, to contact the specialized bodies of Interpol from Lyon directly to receive answers to any questions they may have. That is, to do as other states do in similar situations.

T: How do you personally rate your activity at Interpol?

V.P.: I think that my performance should be evaluated by those qualified with this right. All I can say is that working at Interpol is a unique experience, and it has been extremely helpful to me and has opened up new horizons for me. I have collaborated with a lot of professionals, something which has helped me a lot and I am sure it will help me in the future. I am proud to have been able to handle this position of maximum responsibility.

T: What are your plans for the future?

V.P.: It is premature to reveal something in this regard, but I can tell you that I am considering starting some international projects. I will give additional details when the time is right.