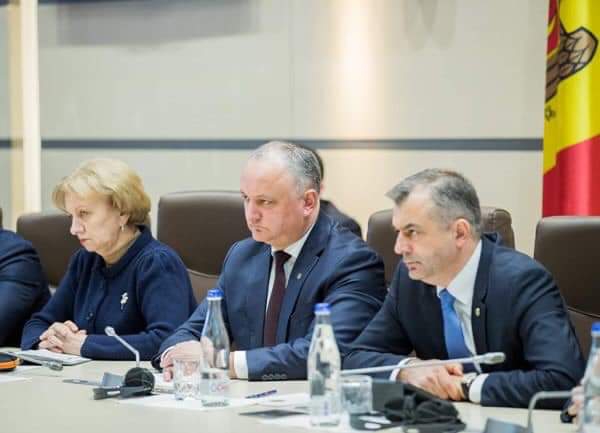 A working meeting with the participation of the head of state, parliament speaker, prime minister, as well as the leaderships of the Party of Socialists (PSRM) and Democratic Party (PDM), at the level of leaders and deputy leaders, was held at the parliament today, the legislative body’s communication and public relations department has reported.

The main topics discussed were focused on the work of the parliament and government on the next period, including as regards the launch of comprehensive long- and medium-term projects, on the continuous improvement of citizens’ living. The participants in the meeting discussed also problems raised by the citizens during visits paid to areas by representatives of the presidency, government and parliament.

President Igor Dodon stressed the importance of this cooperation between the three institutions of the state, unprecedented in the last years. He welcomed the fact that representatives of these institutions can finally stay at the same working table and can have a common agenda based on the Moldovans’ priorities. The head of state reviewed the already launched social initiatives and asked the cabinet to speed up their implementation, so that the citizens can enjoy, this year already, goods roads, settlements’ illumination, as well as other projects underway.

Prime Minister Ion Chicu unveiled the situation on the main directions towards which the government orients its work; it is about the social and economic situation, especially the improvement of the roads’ infrastructure, villages’ illumination, enhancement of citizens’ safety, increase in the number of jobs, increase of the state budget revenues, reformation and modernization of institutions, as well as more projects dealing improvement of citizens’ living, including through the gradual growth of incomes.

The PSRM and PDM leaders exchanged opinions with the PM on the common working agenda of the parliament and government; yet, they demanded also an as good as possible adaptation of the governmental agenda to the commitments the two parties had taken before the citizens. The support of PDM and PSRM for the current cabinet is based on the social platform, in which the main priorities of the citizens were united, not a political one, so that the government is expected to further act namely to solve the priority problems of the citizens. In this respect, the leaderships of the two parties unveiled the expectations they have from the governmental team and agreed with the PM on periodically carrying out an assessment of the way they work in the most important sectors of activity.

The PDM faction suggested the carrying out, jointly by the government and parliament, of a plan on Moldova’s development in the next years, which is to contain concrete measures for improving the citizens’ living. The sides agreed on more measures which are to contribute to, in the long run, to a more efficient institutional cooperation, including through a more active cooperation, so that the parliament and government can come up with actions on the sustainable development of Moldova.

PDM leader Pavel Filip insisted on the fact that the social platform on which the government and the parliamentary majority works at present remains exclusively based on the settlement of citizens’ problems, far from any false geopolitical discussions, follow a European direction of development, including as concerns the strengthening of the rule of law state and liquidation of corruption, pursuing the goal of Moldova’s modernization and European integration.