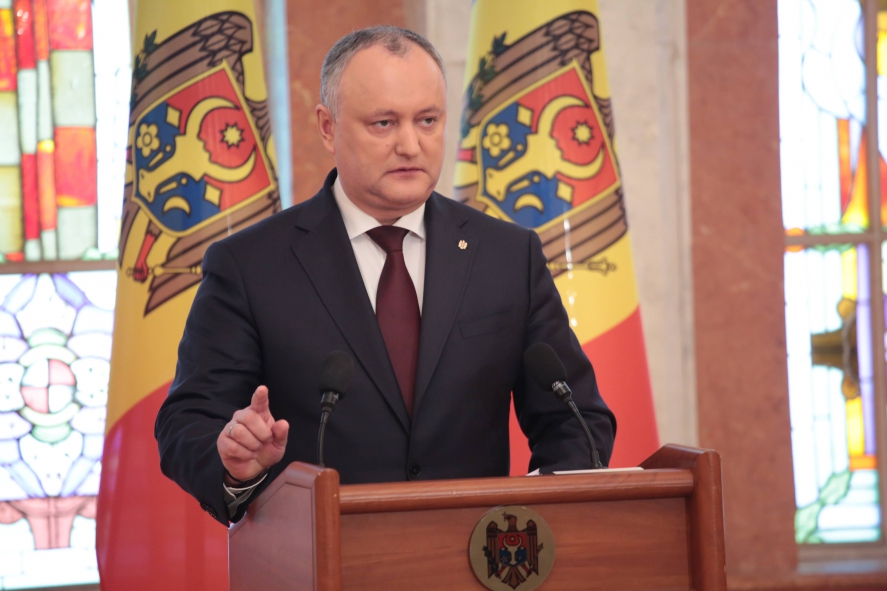 This week, President Igor Dodon showed a clear position regarding the political situation. Thus, he said that next week he will convene the first sitting of the Parliament. “I think it is still too early to talk about a political crisis until the first session of Parliament. Most likely, I will convene this meeting next week. After that, alliances will be formed, and I, as President, will begin negotiations with the parties that have access in Parliament. We hope that, as a result of such discussions, it will still be possible to reach a common denominator. If this will not happen, it is necessary to quickly dissolve Parliament and hold early elections at the same time with the local elections. But I categorically do not accept the transition of deputies from one fraction to another and the creation of a so-called parliamentary majority, as it was the last time, “was the message of the head of state.

Also this week, the President held a speech at the International Forum „VII Global Baku Forum 2019 – A New Foreign Politics, in which he spoke about the principles of the presidential strategy to promote a balanced foreign politics respecting the status of permanent neutrality of the Republic of  Moldova. In Baku, Igor Dodon had a meeting with the President of the Republic of Azerbaijan, Ilham Aliyev, a meeting with Bulgarian Prime Minister Boyko Borisov and talks with other foreign officials.

Also this week, the President promulgated, as a matter of urgency, four social impact laws, for which the Government had previously been accountable; had a working meeting with the Extraordinary and Plenipotentiary Ambassador of the Russian Federation to Moldova, Oleg Vasneţov; other important actions.

TRIBUNA mentions: Igor Dodon was born on 18 February 1975, in village Sadova, Calarasi district. He graduated from the Faculty of Economics from the State Agrarian University of Moldova (1997) and then the Faculty of Management of the Academy of Economic Studies of Moldova (1998). Later he graduated from the Faculty of Law in  Economics at the International Management Institute. He obtained the scientific title of Doctor of Economic Sciences at the Academy of Economic Studies of Moldova, the Department of Banks and Stock Exchanges. After graduating from the educational institutions, from 1997 to 2001 Igor Dodon worked at the Moldovan Stock Exchange. Between November 2001 and May 2005, he exercised the post of chairman and member of the Council of Directors of the National Securities Depositary of Moldova SA.Between September 2002 and May 2005 he activated in the post of president of the Universal Goods Exchange of Moldova. In May 2005, Igor Dodon is appointed Vice-Minister of Economy and Trade of the Republic of Moldova. In September 2006, he is appointed as Minister of Economy and Trade. Since March 2008 he is also First Deputy Prime Minister in the Government of the Republic of Moldova. Since 2009 he is a deputy in Parliament. From 2011 until 2016 he was PSRM President. On 13 November 2016, he was elected President of the Republic of Moldova, with over 52% of the votes of the citizens who participated in the voting.