New Local Elections of 21 November 2021: the results of civic monitoring and opportunities to improve the legal framework and electoral practices 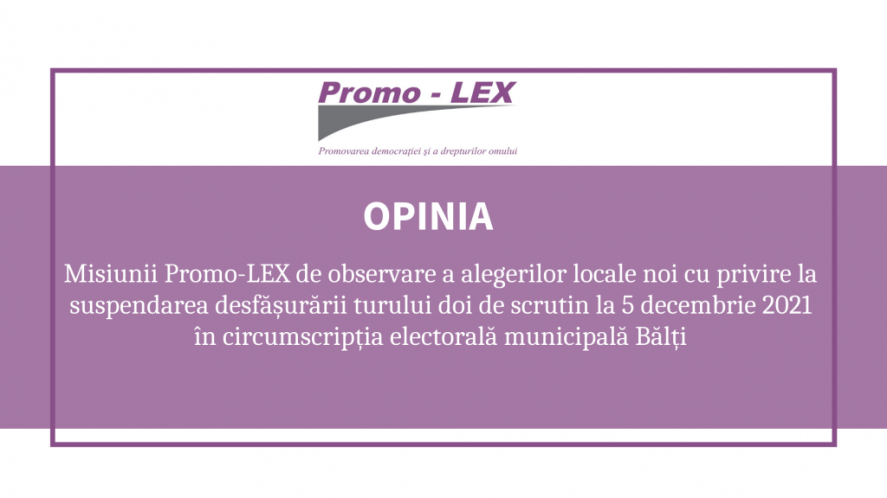 The Promo-LEX Observation Mission (MO) presents the main findings on the conduct of the new local elections of 21 November (5/19 December 2021) in 15 localities in the Republic of Moldova. The mission included both observation of the campaign in the long run (6 observers) and on the election day (28 static observers in each polling station from 14 localities and four mobile teams of two observers in Bălți municipality).

Next, we draw attention to some of issues identified in these elections, as well as the need to improve the electoral legislation and practice.

An increased activism of the Central Electoral Commission (CEC) in supervising and controlling the financial reporting process of contenders, was a distinctive feature of these elections. We remind that this election was organised by a new composition of CEC, which for most of the electoral period was incomplete, but functional. In this context, CEC seems to have applied the highest number of sanctions ever to candidates nominated by parties in the history of national elections. On the other hand, the district electoral council (DEC) did not review any financial statements of with regard to independent candidates.

Promo-LEX estimated that 13 contenders (3 independent candidates and 10 parties) failed to declare expenses of MDL 580,261. The highest undeclared amounts were estimated for PPȘ (51%), BECS (23%), Nicolai Grigorișin IC (17%) and PAS (8%). The biggest omissions are related to the reporting of expenses for staff delegation/secondment. Of the total expenses estimated as unreported, 95% were made by contenders in Bălți constituency. At the same time, according to Promo-LEX OM, in the case of electoral contender Marina Tauber, nominated by PPȘ, campaign expenses were estimated to exceed the legal ceiling approved for Bălți DEC by approximately MDL 253,093.

Before the second round of elections, CEC also found that electoral contender Marina Tauber used undeclared funds and materials amounting to at least MDL 34,260.00, and thus exceeded the maximum ceiling set for Bălți DEC by at least MDL 9514.80. Respectively, according to the law, CEC requested the court to de-register the electoral contender. As a result, on the morning of the Election Day on 5 December 2021, CEC decided to suspend the second round of voting in Bălți constituency.

Contenders are increasingly active online, and election campaigns are still marked by cases that may be classified as misuse of administrative resources. Promo-LEX OM observers reported that at least 362 election promotion activities were conducted by 15 electoral contenders. The most active competitors were: PPȘ (37%), PAS (21%), Nicolai Grigorișin IC (19%) and BECS (14%). The share of online advertising is constantly growing. The absolute majority of the campaign activities took place in Bălți municipality (82%).

At least 22 reported situations were qualified by Promo-LEX as misuse of administrative resources, most of which (15) relate to election meetings with employees of public institutions during working hours. For contenders, the distribution was as follows: Nicolai Grigorișin (IC) – 9; PPȘ – 7; PAS – 5; PAS – 1.

Election day for both rounds was generally calm, but marked by a low turnout, especially in the second round in Bălți municipality. PSs opened and closed regularly, in some cases with insignificant delays. Voting was generally organised efficiently. The vote counting was quick and calm. Promo-LEX observers received 23 alerts in the two rounds of voting, of which 19 were determined as incidents (14 in the first round and 5 in the second). Separately, we draw attention to two cases of intimidation and influence of observers by public persons.

In the first round, the turnout exceeded 1/4 of the number of voters registered in electoral rolls in each of the 15 constituencies, the elections being declared valid. At the same time, in the second round of elections in Bălți municipality voter turnout was 9.98% (10,218), which seems to be the lowest turnout in the history of elections in the Republic of Moldova.

Depending on their political affiliation, out of 15 mayoral positions, 4 (27%) were held by IC and 11 (73%) by representatives of 5 political parties, respectively. Most elected mayors were nominated by PAS – 7 (47%). Out of the total number of elected mayors, 7 (47%) are women, which is a good result from a gender perspective, or we recall that only 29% of registered candidates were women.